This Italian style bread needs no kneading and has only 1 teaspoon of yeast. A tasty bread that  I make every weekend. The Spelt Ciabatta is a good companion with your (Italian Style) meal or Antipasti.  It takes no more then 5 minutes to prepare the dough, which you then leave overnight to prove, developing its beautiful taste.

The family knows the weekend started when they come home on a Friday afternoon, smelling this beautiful bread, just out of the oven.

History: Ciabatta was first produced in 1982 by Arnaldo Cavallari, who called the bread ciabatta polesana after Polesine, the area he lived in. Cavallari and other bakers in Italy were concerned by the popularity of sandwiches made from baguettes imported from France, which were endangering their businesses and so set about trying to create an Italian alternative with which to make sandwiches. The recipe for ciabatta came about after several weeks trying variations of traditional bread recipes and consists of a soft, wet dough made with high gluten flour.

Many Italian regions have their own variety. Originally Ciabatta is made from white flour and the bread develops large air pockets making it very light. In this version I used wholemeal Spelt Flour. Not only is wholemeal flour better for you, I personally find it tastier. Wholemeal flour will not develop the characteristic air pockets as much as white flour, but nothing beats fresh bread anyway.

Who connected us?!  This recipe is from Silvia Colloca from her series “Made in Italy”. I am a fan of this recipe because it is so easy to make and uses only a little bit of yeast. 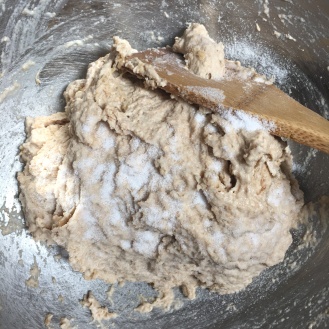 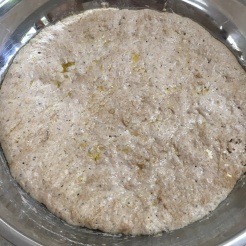